Today I sent this email to Sanitarium.  We are a big fan of Weet-Bix but now I have guilt over the fact that the box is lined with plastic.

Like most good Kiwi kids, I was raised on Weet-Bix. I now have young children of my own and they love Weet-Bix too. I have just one concern: I am currently unable to purchase Weet-Bix without acquiring a non-recyclable plastic bag, the one that is used as a box liner.

This issue has arisen as I am undertaking an exercise to reduce my family’s waste, and especially of single-use plastic bags. With this goal in mind, placing a box of Weet-Bix in my trolley now comes with the guilt of knowing I’ll have to ‘throw away’ the plastic liner. And as you know, there is no ‘away’.

I understand the liner helps keep the product fresh: such is the case with much of today’s packaging.

It is also true that plastic, and non-recyclable plastic bags such as these, are the cause of much marine contamination and kill many birds, fish, and other wildlife, not to mention plastic therefore is finding its way into the food chain, of which we, as people, are a part. The long term implications of continuing on this path are frightening.

Placing a box of Weet-Bix in my trolley now comes with the guilt of knowing I’ll have to ‘throw away’ the plastic liner.

While I can see that there are many other single-use plastic bags out there that vastly outnumber those in Weet-Bix packets, the fact remains the ones in your product are plastic and cannot be recycled, so contribute to the greater environmental problem.

I am interested to know how Weet-Bix used to be packaged, prior to the advent of the ubiquitous plastic bag? Also is this product available in bulk somewhere so that I might fill my own container?
And finally, I’m keen to learn what your plans are to address non-recyclable packaging, are there any alternatives?

Thanks in advance for your consideration of this enquiry.

If I gain Sanitarium’s permission, I will post their reply.
R

In the last month or so I have had a revelation: You don’t need a yoghurt maker to make yoghurt.  Alright, I guess you knew this, or at least suspected it; after all, people have been making yoghurt for thousands of years without them.  But how?  And isn’t it difficult?

It is not. It is dead easy.

Here is my yoghurt journey.

I have been interested in making dairy products at home, yoghurt in particular for many years.  When a product came on the market to enable you to easily make your own yoghurt at home I was sold, and EasiYo yoghurt maker took up residence in my kitchen.   I was impressed with the system on several counts:

And so I proceeded to buy the little sachets of milk powder and culture required to make ‘homemade’ yoghurt.

I liked the product, it tasted good.  There was just that little nagging reservation every time I put one of the plastic/foil sachets in the rubbish bin…’this is going straight to landfill…‘.  Also there was a suspicion that buying a sachet of milk powder and mixing it with water did not really constitute ‘homemade’ yoghurt.  Didn’t making yoghurt start with fresh milk?

A couple of years back I joined a local raw milk co-operative and instantly had a continuous supply of wonderful, creamy, natural milk.  It was the ideal time to try making yoghurt from directly from milk.  I looked up recipes and asked around my friends for ideas or experience.  And very soon, my EasiYo was in use making genuine homemade yoghurt.  All it took was this:

Et voila!  Overnight I had made some real yoghurt from raw milk, without any waste. I was thrilled.

I made my yoghurt from milk every week.  It was not as creamy as store-bought varieties, and while I was full of self-congratulations for getting this far, I wasn’t as happy with the result.  I secretly still preferred the commercial varieties, but was resolute about sticking to my waste-free, genuinely homemade method.  Again I felt I was doing something wrong, that there had to be a way to produce a thicker yogurt at home.  Then I stumbled upon this video about making Greek yoghurt from the website Salad in a Jar.  Another revelation.  what was needed was to strain my yoghurt to remove the whey, leaving it thick, smooth and creamy.  Every bit as good as store-bought.

The video recommends using a chinois – a fancy, ultra-fine sieve – but a little research revealed that these were about NZD90, rather more than I wanted to invest on (at that point) an experimental new method.  Instead, I used my normal kitchen sieve lined with  cheesecloth that I bought years ago from Spotlight’s material and fabric department.  Much cheaper and just as effective.

So now after making my yoghurt I strained it for about 45 minutes.  Actually, as I had only one sieve and had to do it in two batches, it took a total of 1.5 hours.  But it’s a set and forget thing, you don’t have to sit there watching it, you can just get on with other things while it is draining.

My family loved the resulting yoghurt.  You can add sugar or flavours such as vanilla essence at the same time you add the yoghurt culture, I am just making the plain, unsweetened variety.  My 2 year old loves it and will have three helpings after dinner if I let him.

My latest revelation is that the EasiYo is not required for this process at all.   You can make yoghurt just fine using a glass bowl or casserole dish.   I knew it had to be possible to make yoghurt without one, but recipes all talked about putting the dish in a warm place for 12 hours.  I imagined I needed a hot water cupboard, and as I didn’t have one it seemed unlikely this ‘no EasiYo’ method would work for me.  Also up until I learned to make Greek yoghurt there was no impetus to change: the EasiYo made 1 litre of yoghurt and that was good for us for a week.  However when making Greek yoghurt naturally, the yield is not quite as good as you are straining out the whey.  So I was getting roughly 600mls of greek yoghurt for each 1 litre batch I made.  Not only was supply down but demand was up as it was so popular with the family.  I needed to scale production, and the EasiYo was the bottleneck.

So I doubled my recipe to 2 litres of milk, cooled it as usual and poured it into a ceramic casserole dish with a lid.  Then i wrapped an old towel around it, popped it in the cold oven, and let the cultures do their magic.  12 hours later I was incredulous at the sight of the casserole dish full of beautiful yoghurt.  How could it be this easy?  How do we, as a generation, as a culture (excuse the pun) not know this process is so simple?    I strained it – now operating two cheesecloth lined sieves simultaneously for efficiency, and was rewarded with a full litre of thick creamy Greek yogurt for the princely sum of $3.

EasiYo have done very well with their product and marketing: that is what companies do.  But what the Earth needs is not to be told’ you can’t make this with out our products, which by the way generate non-recyclable watse’, but rather ‘here is how you make real yoghurt, from scratch.  With zero waste’.  Only this line of thinking is not as profitable.

My EasiYo’s days are now numbered.  It is still up in my cupboard but I feel it will soon be making a one way trip to the op shop.

Today was both exciting and frustrating.

It was exciting because today I put two new resolutions into action:  the first is to buy bread from the bakery to avoid  the plastic bags supermarket brands come in, and the second is to bring my own containers to the butcher and get them to put the meat directly in, neatly avoiding polystyrene trays and the cling film wrapping.  But both purchases had challenges.

We have been a Molenberg family for a long while, but since Molenberg don’t offer any alternative to plastic packaging, this had to change.  I made my first Baker’s Delight wholemeal loaf purchase last weekend.  They sliced it in their fancy slicer (‘sandwich slice please’) and were happy to wrap it in a paper bag, which I requested. In fact, I got the idea that a paper bags was the standard way of wrapping their bread.  Result!  It is very good bread to boot:  a lovely firm crust and soft inside, the family were hooked. And at only $4 for a sizable loaf it is also good value.  So when we used that last of the loaf at breakfast this morning, I put purchasing another loaf on my to do list for the day.

Today I requested the same wholemeal loaf and asked for it to be sliced, but kind of assumed it would come in paper and hence neglected to request a paper bag. And while I was busy eyeing up the twisty buns, the lady serving had efficiently sliced the loaf and popped it into a plastic bag. Gah!  I belatedly explained that I was aiming to avoid plastic upon which she immediately offered to swap the plastic bag for a paper one. When questioned, she admitted she would not reuse the bag for another customer, but instead would throw it away. When she realised this was not going to make for a happy customer either, she resolved the problem by slicing me another loaf and wrapping it in a paper bag with the promise that she would be able to sell the plastic-wrapped one to another customer.  She almost managed to put the loaf into a plastic carry bag too, but I stopped her in time.  All done with a smile I must add. Well done Baker’s Delight.

Buying meat has been one of my bugbears: how do you avoid all that plastic packing?  And although New World has done a fantastic job in developing a completely recyclable meat tray, meat still comes with the inevitable cling wrap.  What to do?  I stumbled across the answer online: use freezable glass containers.  Pyrex does a ‘Heat & Store’ range which is freezer safe glass with plastic lids, and are available at Briscoes.  I went to Briscoes and ended up buying a couple of dishes made by the US company Anchor Hocking, who offer the same type product but with clear lids called TrueSeal Food Storage. And although the lids a plastic but I see this as saving many single-use plastics in its lifetime. I bought a couple of differing sizes to get me started. 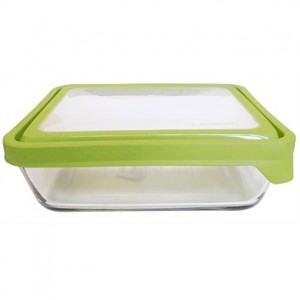 So I turn up to the Aussie Butcher with my glass container and explain my plastic-avoidance preference to the lady serving.  I ask for 10 sausages, and before I could stop her she has grabbed a plastic bag and headed out the back to get them.  I suspect she found my subsequent remonstrations confusing and almost laughable, so I quickly accepted the offered bag, popped it in the container and promised myself I’d do better next time. At least I avoided the polystyrene tray.

The cause of frustration in both of these interactions was all me:  I failed to adequately communicate my position and how I would like the product to be packaged.  I have to confess that this is in part due to a level of self-consciousness:  I’m aware I am bucking the trend, stepping away from what is considered to be normal, so I my requests did not come out as clearly as they should have.

I will get better at this. And the more I do it, the less self-conscious I will become.